Lanin Street, this small passage Barracks neighborhood, home to one of the samples most interesting street art in the city.

Work of artist Marino Santa Maria, a resident of the street, is made up of 35 houses undergoing fronts, which were painted with different colors and shapes, which are then applied to preserve the designs venecitas.

The work began in the 1990s, with the facade of the artist’s studio. The neighbors were thrilled with the work of St. Mary, so he was asked to continue his work on their foreheads. Finally, with the help of the City Government, Unesco, Museum of Fine Arts and various companies, achieved complete the project over the two blocks intervened.

A street in the  city that you can not miss.

The Puente de la Mujer, an emblem of the neighborhood of Puerto Madero, is the first work in Latin America by renowned Spanish architect Santiago Calatrava and is another sign that the City seeks to permanently positioned at the forefront of art and architecture in throughout the region.

It is a pedestrian bridge rotating one of the spinners the world’s largest, designed to allow passage of the sailing vessels that ply the Puerto Madero docks.

The work, carried out in Spain and donated to the City by an individual, represents the image of a couple dancing the tango, where the white mast symbolizes man and the curved bridge women. 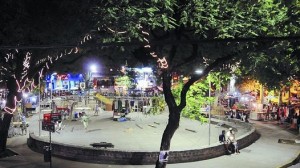 Cortázar Square has become the heart of Palermo Soho district, where many of the clothing stores and cutting edge design and a variety of bars and restaurants.

Located in the neighborhood of Palermo, is an ideal place for a tour of shopping, visiting art galleries or for a night or weekend (to improve the attractiveness of the area, the City Government from 2011 value placed on the environment and renewed his lighting with new LED lights).

Around the Plaza Cortázar will find many bars (many of them offer musical or theater) and a variety of restaurants, with diverse culinary offerings, from the most affordable to haute cuisine.

Curiosities
Did you know that there is the Plaza Cortázar hopscotch commemorating the novel by the great writer? 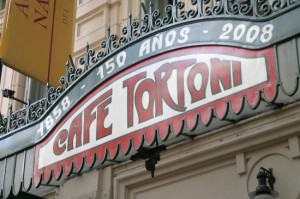 The Cafe Tortoni , notable bar located in the neighborhood of Montserrat , is the oldest in the city ( founded in 1858 ) and is a real attraction for those who visit.

In its marble tables and walls present an important part of the history of Buenos Aires , and that its most important customers were the writers Jorge Luis Borges , Luigi Pirandello , Federico Garcia Lorca and Julio Cortázar , and musicians Arthur Rubinstein and the legendary Carlos Gardel .

Its first owner was a French immigrant named Touan , who named it in honor of another famous Café Tortoni in Paris. The imposing facade on May Avenue was designed by architect Alejandro Christophersen , held in 1898 .

Currently in the basement of Tortoni is entertainment jazz and tango (next to coffee include the National Academy of Tango and Tango World Museum ) .

Curiosities:
Did you know that at Cafe Tortoni Carlos Gardel was always a table reserved for him, out of sight of his fans ? According to the poet Henry Cadícamo , was what was on the right side of the room by the window entering Rivadavia.
Ever heard of meringue , beyond the song of Maria Elena Walsh? The Tortoni is one of the few places in Buenos Aires where you can still order this ice milk taking the inhabitants of the city for over a century.