The City of Buenos Aires has about 250 green spaces (including parks, plazas and squares ) , much used by the locals during weekends and holidays , when various craft fairs and art activities are organized , what for many it becomes a real ride.

Although the biggest green spaces are located in three parts of the city ( Parque Tres de Febrero in Palermo , Ecological Reserve in Puerto Madero and American Indian Park in Villa Soldati ), eac 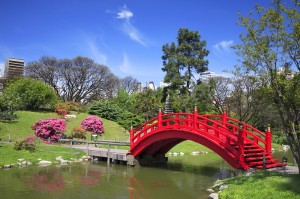 The Japanese Garden is one of the most calm and relaxing places of the city, located in the neighborhood of Palermo. It was opened in 1967 on the occasion of the visit of the current Emperor of Japan Akihito and his wife Michiko .
All elements of your garden seeking balance and harmony. It has a wide variety of plant species, a lake inhabited by fish carp , an island and several bridges and sculptures related to Japanese culture. I modeled the Zen Garden, was redesigned in 1977 under the direction of landscape engineer Yasuo Inomata .
In the park there is also a building that houses a cultural center, a Japanese cuisine restaurant , a nursery where you can buy plants ( bonsai ) and food for fish in the lake and a shop with Japanese crafts. 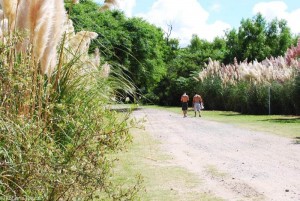 With 350 hectares , the Ecological Reserve is the largest green space in the City of Buenos Aires and a favorite for walking tours , biking , jogging or spend the day with family during the weekend .
Throughout its many paths (leading to the river ) , you can see different species of birds , mammals , amphibians , reptiles and native vegetation as grassland pampas grass and alder forest .
The Costanera Sur Ecological Reserve is the classroom of the city of Buenos Aires where all its inhabitants and visitors can learn about the benefits that nature provides us and how you can conserve the environment. It is also a site that allows a unique and refreshing experience of the mind and spirit, healthy choice and increasingly necessary in one of the most populated cities in the world.
His creative nature was that life brewing over the place and splendor using the ruins of the proposed » City Administrative Centre » a venture that sought to beat the river lands , and randomly ended up giving him to Buenos Aires one site .
In 1986, the area was declared a Natural Reserve Zone and Park .
Costanera Sur Ecological Reserve is an opportunity to demonstrate through their enjoyment and conservation , we have understood that we can not live without it. 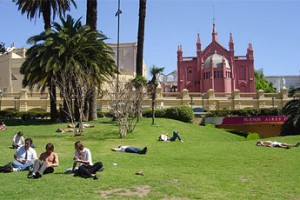 This green space in the neighborhood of Recoleta (sometimes is confused with the neighboring Square Mayor Alvear , where the craft fair weekend work ) was designed by the famous landscape architect Carlos Thays and its central monument, called » France to Argentina » ( the French sculptor Edmond Peynot and opened in 1910 ) , was a gift from the French community in the country to mark the centenary of the May Revolution . The three allegorical figures of the middle, made ​​of Carrara marble , representing the Science, Industry , Agriculture and the Arts. The four bronze reliefs evoke central events in the history of both countries , «The First Government Junta of Criollo » and » El Paso de los Andes» in the case of Argentina , and » La Bastille » and » The Declaration Independence «for France .
The two female figures that crown symbolize the shaft to Argentina and France , guided by an angel who personifies Glory. The plates around the monument recall personalities of French origin : Sunday Porteau grenadier , who died during the battle of San Lorenzo in Argentina struggle for Independence , and the writer and journalist Émile Zola. A sculpture by Lazaro Djibilian depicting Louis Braille, creator of literacy for the blind.