TEATRO COLON
It is one of the world’s leading opera houses and in the twentieth century in the Columbus acted directors, singers and dancers of the age.
His first inauguration was in 1857 in front of Plaza de Mayo but closed its doors in 1888 to become the seat of the National Bank. That’s when the authorities of the City called for bids to build a new theater.
The Central Hall, horseshoe shaped, is considered one of the best acoustics in the world, and has a dome decorated by the painter Raul Soldi.

The theater has a permanent company, a ballet, orchestras, set and costume workshops, a library and a museum. Its capacity is 3,542 people seated and 700 standing. 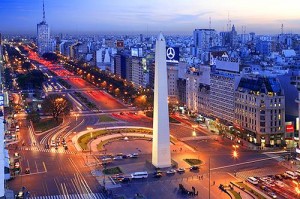 EL OBELISCO
The Obelisco, opened in 1936, recalled in each of its faces a historic Buenos Aires: the first foundation, in 1536, the second and final, in 1580, the first national flag was raised in the city in 1812 ( in the church of St. Nicholas, which stood precisely where today stands the Obelisco) and the constitution of Argentina Buenos Aires as the capital in 1880.
The work was conducted by Alberto Prebisch, one of the main architects of the Argentine modernism also the neighboring Teatro Gran Rex, in Corrientes and Suipacha.
For the construction of the obelisk was used white stone of the province of Córdoba. His only door leads through a staircase of 206 steps and seven breaks up the four windows of the cusp. The monument is one of the meeting points in the city for political demonstrations and for the celebration of sporting achievement. Although rejected at first, today the Obelisk is one of the architectural symbols of Buenos Aires.

CORRIENTES Avenue
It is one of the most representative streets of Buenos Aires and one of the most beloved by the locals. Corrientes Avenue is bookstores, cafes, theaters and pizzerias and during the decades of 40’y 50 ‘witnessed the golden era of Tango. Corrientes born in Puerto Madero neighborhood and ends at the Chacarita after 70 blocks of travel.

Between 1910 and 1938 there was a great work widened the street and turned in avenue. His name, like that of neighboring avenues Córdoba and Santa Fe, is a province of Argentina. Go through the city’s downtown and the areas of Once, Abasto, Almagro and Villa Crespo, very typical parts of Buenos Aires and with strong historical relationship with Tango.

The most traditional pizzerias are on Corrientes. About Obelisco, between Callao Avenue and Emerald Street (Downtown), Corrientes has the greatest concentration of libraries and theaters throughout the city. Virtually all major theaters of Buenos Aires are in this section, as the Maipo, the Grand Rex, the Opera House, the Avenue, San Martin, the Astral, the Lola Membrives, the Multiteatro, the Metropolitan and the Alvear, among others.

Current libraries usually open until after midnight, especially on weekends, and the bigger ones have bar and theaters. This stretch of the avenue also concentrates a lot of the bars and cafes of Buenos Aires known as La Giralda, La Paz and El Vesuvio.