Wonderfull Squares of Jorge Luis Borges, the furtive heavens of Julio Cortázar, sharp corners of Roberto Arlt or the flowery paths of Oliver Girondo write and describe only some of the pages most famous and most celebrated of this fascinating open book we usually call to Buenos Aires. Because when you pierce the streets of Buenos Aires conscientiously come to the surface books and writers who can not live and dream without Buenos Aires. 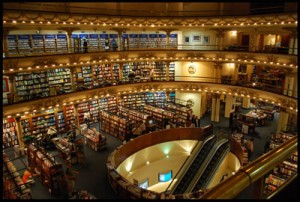 If a character can join the love of books and libraries and fervor through Buenos Aires, this is certainly Jorge Luis Borges (1899-1986). Craving peace perhaps made ​​of shelves and loneliness, between 1937 and 1946 Borges exercised a subordinate post in the Municipal Library Miguel Cane, the traditional neighborhood of boedo. Still live in the building from the street Carlos Calvo 4319 you can visit the little room where who knows if there will be ruminated Borges one of its most fascinating stories, The Library of Babel, and pilgrimage in search of the «catalog of catalogs» by the shelves that «unreadable library in the southern suburbs,» as Borges himself seemed honor her in his story the Aleph. In 1955, Borges was named director of the National Library, a position he held until 1973, developing its activities in Mexico Street Building 564, in the picturesque neighborhood of Montserrat. Declared a National Historic Landmark, there currently operates National Music Center. Borges devoted immense energy to promote vital public space representing every library, and certainly his legacy continues on in corners, book pages and concerns readers of the new National Library building an architectural icon called Brutalism, worthy of being seen, which is accessed by the street Agüero 2502, in the upscale neighborhood of Recoleta. 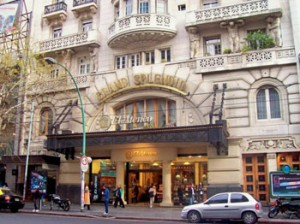 Looking «the sunsets, the slums and misery,» Borges wrote in 1923 that sort of tour guide and emotional titled Fervor de Buenos Aires, a series of poems that can be covered evergreen pieces Buenos Aires history, locating specific sites such as Plaza San Martin and La Recoleta, or amplifying it in the absence elevated sentiments, the night, the dismissal or patio. With Designation of Origin Jorge Luis Borges find also the words that the author devoted to the neighborhood where he grew up: the Palermo district. In 1929 he wrote one of his most famous poems, Mythical Foundation of Buenos Aires, bevel pointing the epicenter of his childhood experiences: «A whole apple but field mita / exposed to rain auroras and sudestadas. / The block which still stands in my neighborhood: Guatemala, Serrano, Paraguay, Gurruchaga «. Paradoxes of fate or Borges tale come true, in 1996 the government of the city renamed the street Serrano as Jorge Luis Borges, why the «apple people» in the poem and not persist, because the street Serrano, nominally, longer exists.

To read the Palermo on the lines of the hand of Jorge Luis Borges do well to walk slowly, without trying to catch the elusive: neither is there and the number 2135 on the old Calle Serrano address Grandma Fanny where he lived Borges its infancy, because the 2129 is followed by 2137. However, in these streets «twilight and sunset enternecidas» old spirits still reluctant to name, to which it is possible to play «as someone who fondles sleeping» are those trees of Buenos Aires, La Pampa favorite sons that living under tiles and pavers, which strives to keep feeding them.