A medieval village in Buenos Aires 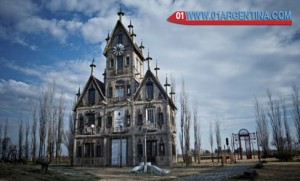 Campanópolis is a unique and compelling village, formed by hundreds of different styles of buildings, connected by alleys, passages, nooks and secret places that refer to the peoples of the European Middle Ages but with an eclectic style and crowned himself the nature environment.
With such captivating as might be seen in the European city of Bruges, landscapes Campanópolis was built entirely from recycled materials. Other attractions are a footbridge that crosses the Casas del Bosque, transporting us to a great place, with water fountains, lakes, bridges quebracho, islands, springs, a Dutch windmill, a colonial chapel and a wooden locomotive with wagons dating from the early twentieth century.
Among the construction we have several attractions like the Museum of Grids, where all kinds of wrought iron, tools, hanging chandeliers, stained glass, antiques and pieces of art are displayed. There is also the Timber Museum, where exhibits everything related to it.
Other sites of interest that can be seen during the tour are: the Stone House, the House of slag, the Cabildo, the Casa Prow of ship, Passage Owl Museum Caireles and hundreds of secret spaces to experience the fantasy living in the middle ages.
Campanópolis is ready for all types of events, the only limitation is your own imagination. You can develop exclusive events less than 10 people to events of 1000.
The village facilities are adapted so that they can develop different activities: weddings, social events, business breakfasts, business meetings, product presentations, cultural and recreational traveled, designed for incoming tourism and sporting events.
We have different adaptive capacities meeting different needs, as well as, catering, custom guides, monitoring and heliport.

In 1977 Don Antonio Campana purchase lands that now make up the campus of Campanópolis. In 1985 CEAMSE temporarily expropriate these lands to fill cellars with trash rough suburbs. They spend another 5 years, and 90, the property is recovered, being the same in a dire state.
At that time he was Don Antonio detects health problems. At that time, the former trader decides to make food sanitation, cleaning and filling of the land, for the subsequent construction of this village with fully recycled materials, collected from various demolitions and exotic places in Buenos Aires and elsewhere.
Antonio, the son of immigrants, with primary education, not flat but with love and dedication, designed and built what his friend, the late Professor Alfonso Corso, baptized Campanópolis: City of Bell.
Campanópolis has an amazing story you can go slowly discovering, along with a tour I reported based on the founder’s own testimony. As with any project made ​​from fantasy, dreams and effort, has an unbreakable bond with the art and emotion of achievements.
Built on an area of ​​over 200 hectares having plains, wild forests, rivers, streams, lakes and rich history, has been the place to create a work of art where live eclectic architectural style houses, cobbled streets, the passages that lead through various twists and scenarios that recreate the best European medieval villages.
The story goes that 30 years ago this dream began on a former landfill (ex fillings Metropolitan Area Ecological Belt, CEAMSE) and today is a city where recycling and reuse of materials are essential components of the village.
Campanópolis grew to measure the creativity of Antonio Campana since its inception and today, his family has continued to build this strange, magical and mysterious village.
Oldest stories also have this village hides a very important historical past. According to reliable documentation of several historians, at the confluence of the creek with Morales Matanza River – within the premises of Campanópolis – is one of the main volumes of the first foundation of Buenos Aires commanded by Don Pedro de Mendoza performed. This according writings and maps of the German Navy and Expeditionary Ulrich Schmitd who took refuge in the coast of Brazil after the first foundation was expelled by the natives. At that place today ecological reserve protects a thick history with jungle flora and fauna that amazes.
Another element is the historic residence since the nineteenth century it was owned by Don Juan Manuel de Rosas. The conservation status of this construction allows us to see original railings, portholes and shooting angles, bricks colonial times, and other details of construction.
Campanopolis: the former camps of Juan Manuel de Rosas
Studies Historian Professor Alfonso Corso, Camponópolis has been part of the property of Juan Manuel de Rosas.
These fields in the mid-nineteenth century to 1840 – have been inhabited by a foreman (shepherd) of Brigadier General.
We found that the main historic house has a characteristic building of the time, «L» and has pockets where people drew their firearms to defend against Indian raids and attacks by outsiders. It is built with characteristic ladrillones of the time seated with adobe or mud. Its walls reach 60 centimeters wide.
Campanópolis: primal Buenos Aires
In 1536 Pedro de Mendoza founded a military settlement which he called Santa Maria of Buenos Aires, in honor of the Virgin patron saint of sailors and travelers. This settlement area considered the founding of what would become the City of Buenos Aires re-founded by Juan de Garay in 1580 – can be located geographically, thanks to historical studies of Alfonso Corso in Campanópolis.
Corso takes the writings of Ulrich Schmidl, expeditionary traveler who toured American soil for 20 years. In its chronic Ulrich narrates: «… who wanted to eat a fish had to walk four miles …». It follows that the City or Real – as it was called then – was not on the shores of the River Plate but some distance from it.
Ulrich’s diaries are an important source when debated clarify the location of the primal city of Buenos Aires, this traveler considered the first «Historian of the Río de la Plata» states: «… Mendoza established the Royal alongside a small river that enters the great river … «.
It is precisely the confluence of water between the Arroyo Morales (small river) and the Matanzas River (Big River) that makes reference Ulrich. This foundational area is within lands Campanópolis. Where is a tribute to «The Stick of Justice», in memory of the historic feat of founding one of the most important cities in America.
The dream of a visionary.